Sign up for our e-newsletter to receive email exclusive coupons.

We salute our present employees and those who have gone before them. Without them what you see today would not have been possible. It is with hard work, sacrifice, and an unselfish desire to serve our fellow men that we continue to GROW GREEN plants and expand our agricultural services.

We are thankful to God for blessing the labors of our hands and for guiding our lives. Green survival and the beautification of our environment -It’s the concern of all of us!

2nd and 3rd Generations in Agriculture

The Story of Lukas Nursery

The story of Lukas Nursery and the Lukas family began over one hundred years ago when Paul Lukas and Mary Klimek, two young Czechoslovakians, made separate journeys across the ocean in search of new lives in a free land. Mary arrived in America in 1899 and Paul in 1905, the two meeting in Cleveland, Ohio and marrying in June, 1908.

Working hard and saving, the young couple wanted to leave the crowded industrial city for a life of farming. Their dreams were realized in 1911 when they, and six other families, traveled to Florida, settling in the rural and largely empty flatlands near Oviedo. There, in what is now Seminole County, they began farming in 1912 and raised their families, naming the area “Slavia” in keeping with their European heritage. In addition, as devote and practicing Christians, the settlers built a formal house of worship that to this day is one of Oviedo’s most well known landmarks, St. Luke’s Lutheran Church.

Six children were born to Paul and Mary Lukas –Paul Martin, Milton, Daniel, Dusan, Mary, and Mildred. Times were hard, however, so in addition to farming, Paul supplemented their income by driving a horse and wagon to Winter Park where he sold fresh produce to stores and hotels. On occasion, he even extended his stay in town to repair shoes –a trade he acquired before immigrating from Czechoslovakia.

Eventually, Paul was able to buy additional land and increase crop production, with father, mother, and children all working hard on the farm to advance the family. After his death in 1939, Paul’s son, Paul Martin, continued truck farming, at the same time looking after his younger brothers and sisters.

Paul Martin married Gertrude Cecelia Greenleaf in 1946. Their union was blessed with four sons –Paul Martin Jr., Jonathan, Philip, and Stanley. After Paul Martin’s untimely death in 1970, his eldest son Paul Martin Jr. realized the small truck farmer’s days were numbered and went out in search of ideas for ways to continue a profitable trade in agriculture. During that time, Gertrude made ends meet by delivering eggs around the community from their “Happy Egg Farm.”

Lukas Nursery was the product of Paul Jr.’s search. Founded in February,1973, the company began with 50 one-gallon cans of woody ornamental plants and a sales area under an old chicken house. Gertrude joined her son Paul Jr. in the nursery business that same year. “Most appropriate for ‘Greenleaf’ to help keep the leaves green,” Paul Jr. said. Within three years, Lukas Nursery had grown from those original 50 containers to two and a half acres of container-grown plants along with its own propagation house.

In 1976, Paul Jr. started a foliage nursery on Plymouth Sorrento Road in Apopka, FL, turning the Slavia operation over to his brother Stanley and his mother Gertrude. The two and a half acres expanded to 24 acres of container and field grown plants, with the addition of a new propagation house, potting machine, potting shed, and first official sign. 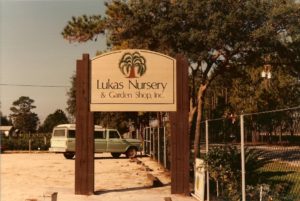 Lukas Nursery was officially incorporated in December, 1976 with the following officers: Paul M. Lukas Jr., president; Stanley T. Lukas, vice president; Gertrude G. Lukas, secretary/treasurer; and Jonathan S. Lukas, director. Philip Lukas joined the family business in 1977 as a vice president and general manager, and with his knowledge and guidance Lukas Nursery has become a great success, ranking as one of the top 100 independent garden centers in the United States in 2012.

Improvements to the business (now “Lukas Nursery & Garden Shop”) include a new sales shop built in 1980 (currently the pottery barn), an even larger sales building and new barn built in 2000, the Butterfly Encounter built in 2004, a new corporate office built in 2012, and a new state-of-the-art greenhouse in 2014.

We are thankful to God for blessing the labors of our hands and His guidance of our lives. — Gertrude G. Lukas

Here are just a few of our many Lawn & Garden Suppliers